LAND Region:
Scotland›Tayside & North Fife
LAND Project Type:
LAND Learner
As a place for living, work and recreation, Comrie Croft is involved to varying degrees in virtually all areas of permaculture activity. The focus over the first 10 years has been on enterprise and making the place financially self-sufficient. Now, the focus is shifting to include a small 'eco-village' designed to demonstrate good practice and serve the needs of the local community in terms of affordable rural housing.

Comrie Croft is a community of ecotourism and land-based people and enterprises set at the foot of a mountain on the edge of the southern highlands. Enterprises include: A venue for weddings and events; farmstead accommodation (74 beds); a market garden; farm shop; cafe; bike trails, hire and shop; and a camping and glamping site. Our mission is to demonstrate that with the application of permaculture principles, entrepreneurial thinking and collaboration, rural places can be vibrant healthy places for people and nature. Ultimately we want to see permaculture design principles become mainstream.

The ideas behind Comrie Croft were inspired by a hand drawn map from the 1700s showing up to 12 households living on and working the land. By the early 1990s the farm could no longer support one family and it looked like it would be amalgamated into a larger land holding and the buildings converted into executive housing.

But why should the story of rural areas be one of constant decline? We believe that rural areas can and should be resilient, vibrant places with abundant nature, where everyone can live well within an equitable share of the earth's resources. This is what we are attempting to demonstrate at Comrie Croft.

The Croft is set up as a private company co-owned by 50 employees, local people, friends and family. It was established in 2008 to buy out the previous land owner and pursue the new vision. Finance was raised through the co-owners and a large bank loan from Triodos Bank, who have supported the project from the outset.

Some of the enterprises at the Croft are independently owned and managed - Tomnah'a Market Garden and the Tea Garden at Comrie Croft being the most notable. Tomnah'a (est. 2016) operates on a Community Supported Agriculture model, leasing a 3 ha field within from which they grow a wide range of fruit, veg and flowers. Sales are made direct to local people through a veg-box scheme, flower club, local markets/food assembly and weddings. Produce is also sold wholesale to the onsite farmshop, cafe and local chefs/restaurants. The Tea Garden Cafe serves a range of homemade and 'field to fork' salads, soups, cakes and other goodies.

Number of people text:
Approximately 20 people (Full Time Equivalent) work within Comrie Croft Ltd, with another 10 (FTE) working within the independent enterprises and volunteering. Visitors through the Croft are estimated at 40,000 annually.
Contact person by email
Contact Name:
Andrew Donaldson
Number of people involved:
30
Telephone number:
01764670140
Many different areas of permaculture activity can be seen including renewable energy (electricity generation and storage, mini-district biomass heating system), food production, buildings construction (e.g. an off-grid turf-roofed vermiculture toilet block), habitat creation and re-wilding of large parts of the land-holding, and others. As important as individual elements are the symbiotic connections between them, one example of which is the re-use of card-board bike boxes from the bike shop, for use as a mulch on the market garden.
Website:
Comrie Croft website
Project start date:
May, 2008 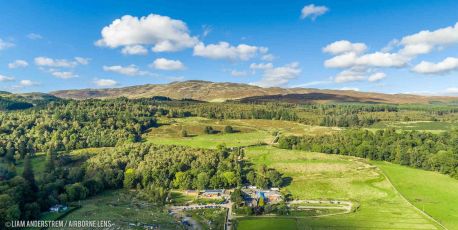