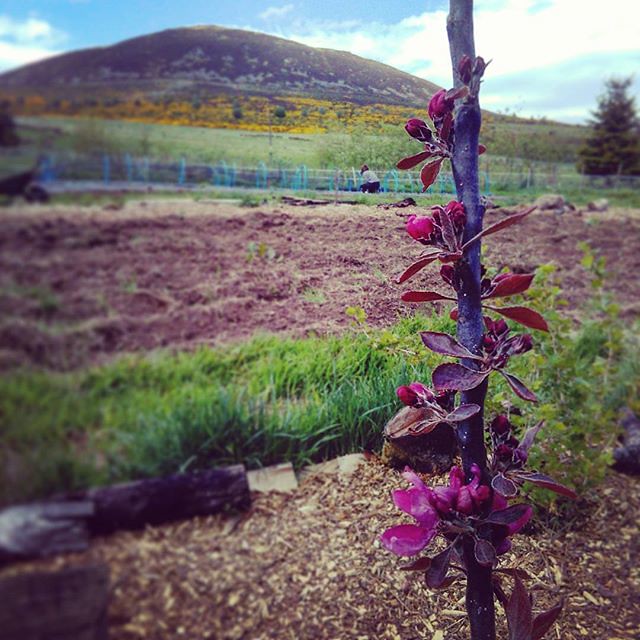 I was very excited when I arrived to Tap O’Noth Farm, in Aberdeenshire, after a short trip from the Black Isle. James Reid’s project was the first permaculture farm I was visiting. That is to say, it was the first project where food was grown using permaculture principles, not merely to meet some level of self-sufficiency but also to be sold in his community.

After some years travelling in Australia, Portugal and Scotland, James found land at the bottom of Tap O’Noth hill five years ago. He first used the land as a permaculture demonstration site, affiliating himself with the Permaculture Research Institute of Australia, and later with the Permaculture Association when he became a ScotLAND centre. He hosted a Permaculture Design Course, and started a bigger garden in order to feed the students.

But in January 2016, returning from the Oxford Real Farming Conference, he decided to start a new project: a market garden to sell vegetables and eggs to his local community through a vegbox scheme, something that was lacking in the area.

I fell in love with this place, with its three Shetland cows, chickens and ducks, ponds and woodland, baby carrots, beetroots and kale, willow and sycamore, its many shades of grey and the gigantic hill in the background. It’s a land that has a soul, and James’ designs really captured it.

Time would fly, and four hours weeding tiny little beetroots did not even feel that long. It was a strange feeling, creating life and permanence, making beds out of unused soil that would soon be hosting seeds, later transformed into delicious vegetables by some sort of miracles (and hard work!), to be eaten by a family in Rhynie or Huntly. 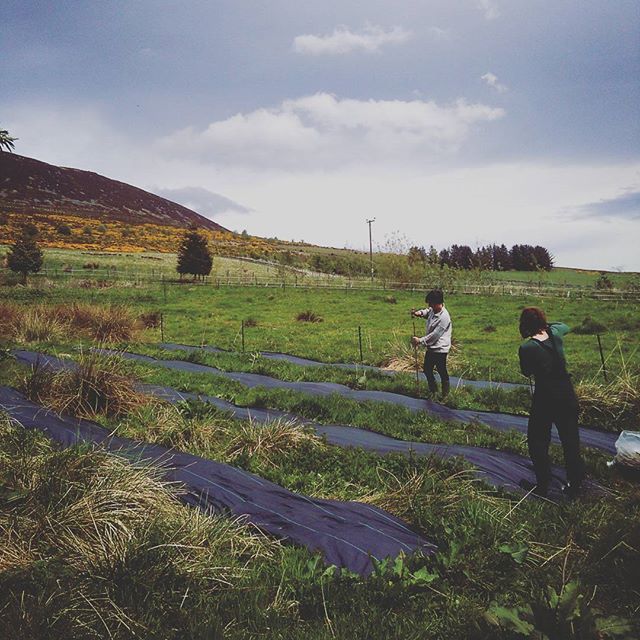 I read somewhere that Antoine de Saint Exupery had once said that the three best jobs in the world were writer, aviator, and farmer. And yes, although I knew full-well this was in no way representative of modern farming nowadays, there was something magical about farming at James’.

My nails were full of dirt from the digging and the weeding and the planting; my legs were covered in scratches and marks from nettles and brambles; my back was sore and yet: I felt so good, looking at the window from the caravan and observing the changes in the landscape – areas we had mulched, new beds being created, kales growing and trees planted.

The notion of land took a very different sense for me during that time – having lived in a city my entire life, I had never understood what it meant to ‘have your own land’, and the sort of sensual, emotional relationship you can have to the soil under your feet and the trees over your head.

When I interviewed James, he mentioned, after looking for a better word, a form of ‘calling’ to farming, and to using the land to feed his community. He added ‘I’d die a little inside if I couldn’t do that’.

From a permaculture centre to a farm

When he decided to become a market gardener, James changed the name of his business: he was no longer a ‘permaculture site’, but a farm.  He said this change allowed him to have more positive interactions with his community – a farm resonated more with the world they knew, and permaculture was not a term people were accustomed to.

Moreover, he wanted his farm to be ‘normal’, without hundreds of adjectives to qualify what he was doing. Yes, it used permaculture principles and designs, but it was overall a place where good food was being produced, and sold. Over the time, his conception of permaculture, and its place in his life, shifted from being central to more peripheral.

If he still thinks of it as a very useful toolbox to organise the land and use it, he does not strictly swear by it. ‘It’s very unproductive to be stuck with your ideals’, he said. He has found a much deeper relationship with his local community than with the international permaculture community (which he hosted during the PDC), and prefers to focus on this now, and on ‘blending in with the scenery’ a bit more.

At the same time, he is providing an invaluable service in a town that has lost its butcher, its baker and its pub over the years. Arguably, eating food produced locally by a member of the community fosters this sense of community. ‘We are what we eat’, not only as individuals but also as collective members of a town, as citizens. So when James told me he saw himself as non-political, I thought I needed to redefine what I meant by being political.

Our late experience of institutional politics in Western Europe has been, with some exception, one that has left some of us feeling powerless, disgusted by politicians that are seen as ‘all the same’.

Indeed, most of them followed the same curriculum to get where they are, and have little to none on-the-ground experience.  As a consequence of that, politicians have managed to make us believe politics was out of reach for normal people; they have disempowered us of our most crucial right as citizens: being political beings, having control over our society.

So being a political being doesn’t necessarily mean knowing anything about parties, about who won what and who did what to who. Being political, in my understanding, first means dreaming, imagining the society you want to live in, the interactions you want to have, and acting upon it.

It will not (always) involve barricades and overthrowing capitalism (at least not in the first weeks), but it will involve finding other people to work with: your neighbour, your immediate geographical community, your local party, a national organisation, ... It will involve working with people you don’t always like, and maybe making concessions to your own personal dreams.

When James decides to sell vegetables to his local community rather than host international students, when he supports group such as the Land Workers Alliance, when he says that he is not political or, half-jokingly, that all he does is ‘try to be an outstanding member of [his] community’. 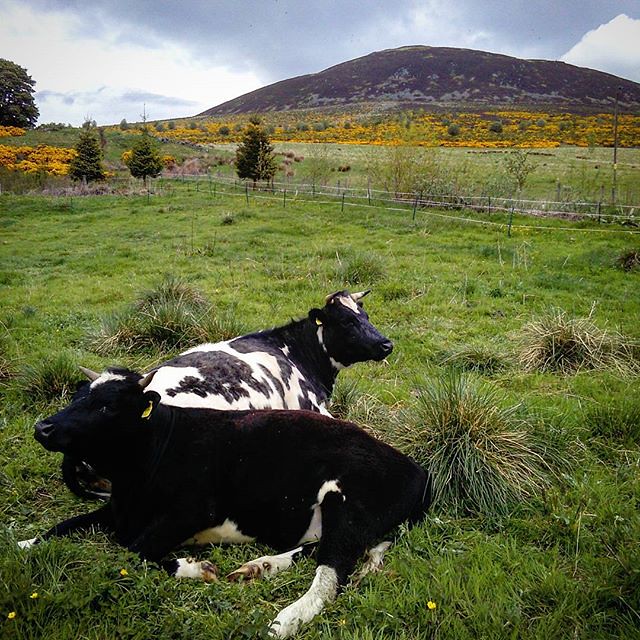 What I understand (and maybe I’m wrong) is that his personal, ideal society involves living in a small place in a rural setting, with a strong sense of community, based on the sharing of production and a sense of self-sufficiency and autonomy.

His ideal of society involves smallholdings rather than industrial farming, a new relationship to land and nature, and permaculture ethics: earth care, people care and fair share (redistribution of surpluses).

Deciding to use his skills to produce food for his community might not be the idea we have in mind of politics, but if we look at it from a different perspective, it is not so dissimilar: he is taking an active step forward to meeting his goal, his ideal of society.

James' farm is enhancing a sense of community and working towards sufficiency while respecting the land and nature. At the same time, he is working with local and national organisations, giving him opportunity to advance his own ideas and ideals whilst also being influenced by others.

"Man is, by nature, a political animal"

From the moment where you expect something else than what our current system is giving you on, you are a political being. Even more so when you act upon it, and when you organise.

The point is: you don’t need to be Noam Chomsky to be radical and political. You don’t need to fight against everything, all the time. And yes, focusing your time and energy on building a better world, as is permaculture’s goal, can be a very good way to be political and to have an impact.

We need more utopians, we need more Rabelais and Fourier to imagine what life could be like; to inspire us. But we also need to embrace the fact that if politics do not just happen behind the closed doors of Parliament, what we do in our personal life has very little impact if we don’t organise to build a strong(er) movement. 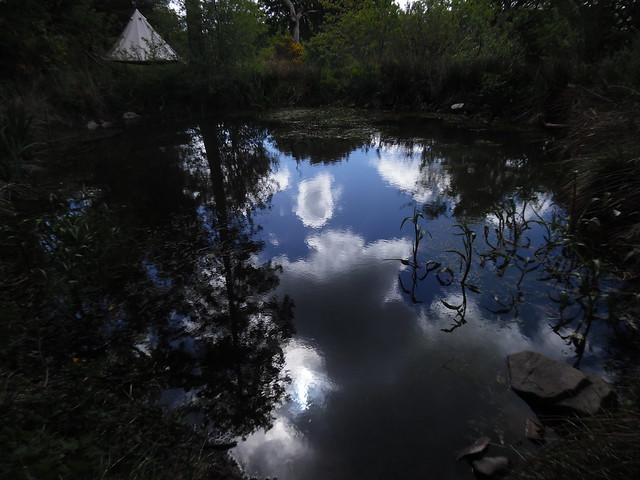 I don’t know what is the best way to organise; I have no experience in setting up a social movement; and I am at a stage of reflexion and observation rather than concrete actions. I am not there to give any lessons on what the best way to change the world is – I sadly don’t know the answer to that!

Yet, I thought this article was needed because I encountered many people in the permaculture world that did not want to see themselves as political or as activists – although they clearly had very specific ideas of what their ideal society would be like. Some were never involved in any political militancy; some were, and have been disappointed, or got tired of resisting ‘for nothing’: it takes decades to change the mainstream, and it is exhausting, and slightly depressing to always be against everything your society produces.

And yet, we are political animals. Wherever we live, there is always a complex level of interrelations and interactions, and we cannot pretend not to be affected by these.

And there are many examples of politics empowering people and bringing changes. I am thinking of the working-class and the communist manifesto not so long ago; the African-American community in the 1950s and 60s; the Highland crofters in the 1880s, resisting successfully to the Clearances after traumatic decades (I wish to go back on that in a future article).

We need to be agents of change and of utopia; but we also need to confront the society we live in now. Of course, not everyone has the time, the energy or the will to do all of that – but this is why we should unite, converge and organise with other groups with similar interests, and the same vision. I believe permaculture’s ethics and the knowledge of its adepts regarding nature and designing our environment would benefit a bigger movement.

But all of this starts by the realisation that we are not solely individuals with a green lifestyle – we are a political community. We have demands, we have a vision of what society should be like, and we are actively working towards that.