Barrel House Permaculture is a private home and partly private, partly borrowed garden, which is extensively used as a permaculture teaching and demonstration site by the various educational institutions in the Findhorn community, hosting approximately 600 people/year. Currently two people live here full-time: Craig, who has built, managed, lived, and raised a family in the house and garden since 1991 and Maria, who is renting a room from Craig since 2016. Both are very active in the surrounding Findhorn community and ecovillage, especially through running internal and external educational programmes in permaculture and ecovillage design. Craig has been there since the 1960s and is considered (at least by some) a feral elder of the community. 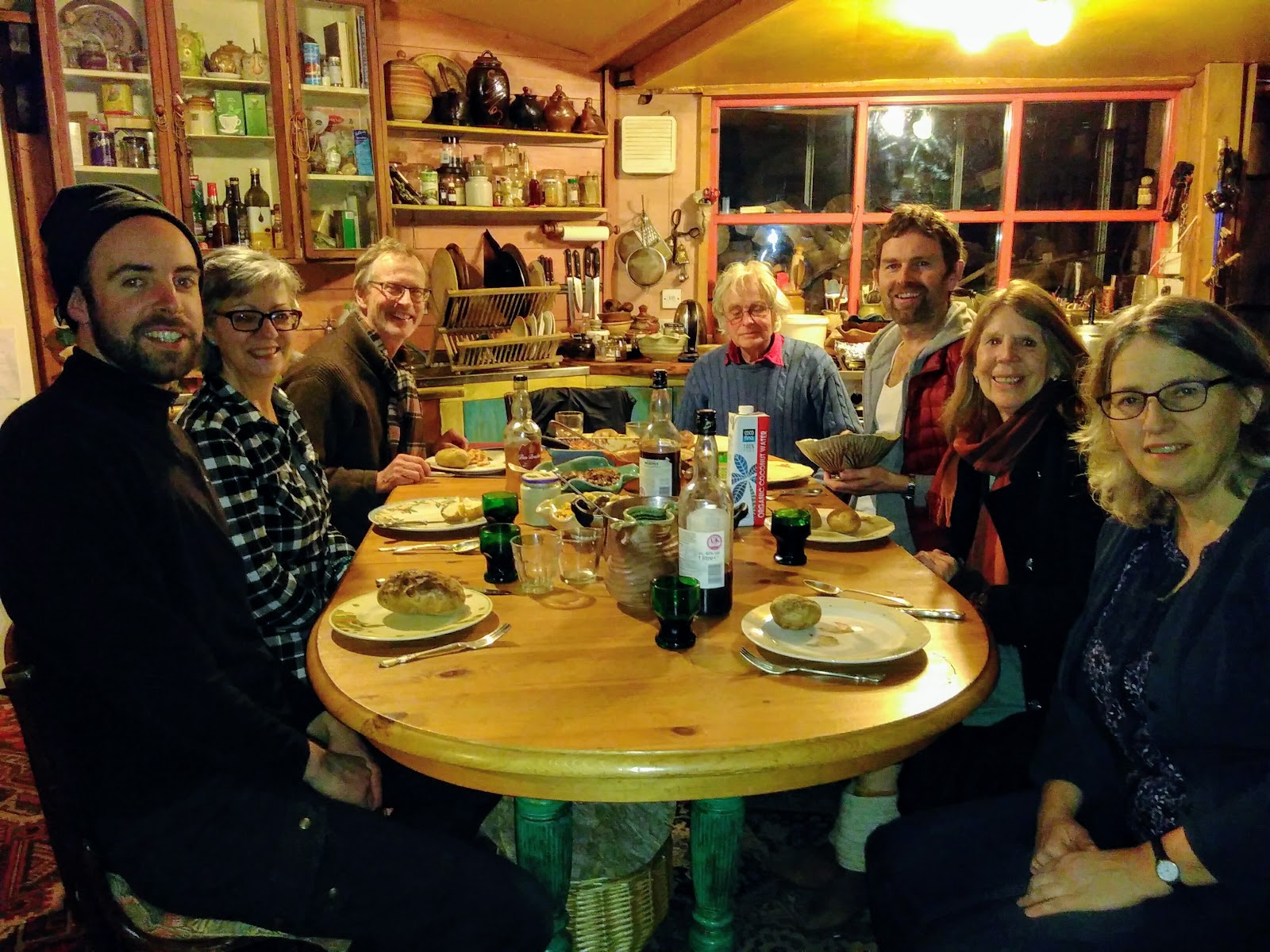 But it wasn’t always this way: ‘The Barrel’ had humble beginnings. The barrel, which was actually called a tun, had been used in the whisky distillery business, and when the local distilleries decided to replace the old wooden ones Craig thought “That’s a good resource going to waste!”, and decided to build tiny homes from them. It was built on a concrete slab which was the foundation for a WW2 Nissen hut, and has since played the role of host to many and changing forms of life. 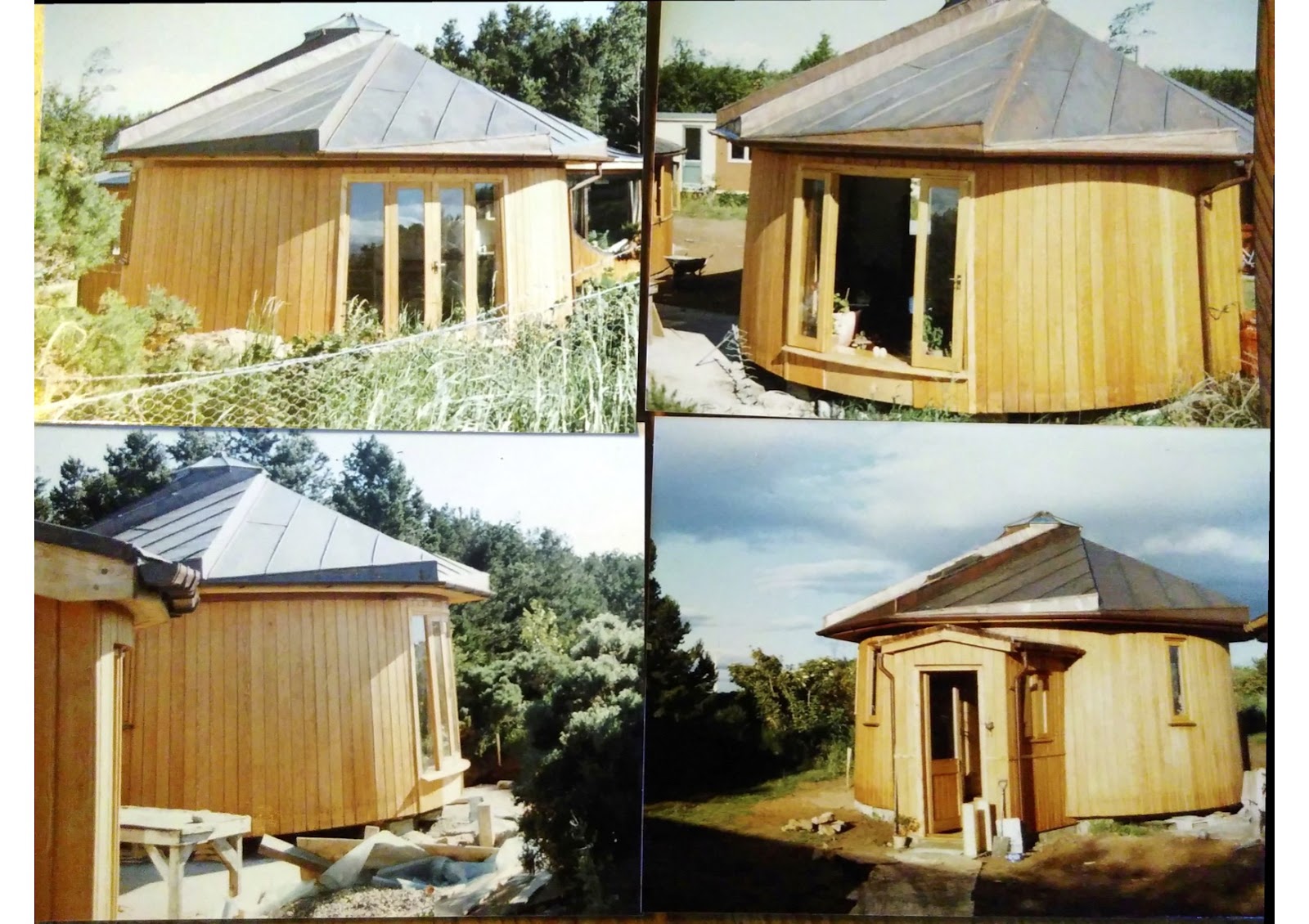 The surrounding landscape was sand dunes littered with waste left over from the war. Much of it was toxic and covered by gorse, broom and elders, the pioneers species of the local ecosystem. Craig began to start a small herb garden by cutting down the gorse and broom leaving the roots in the ground as they are both nitrogen fixers, plus planting fruit trees amongst them so as to give them shelter on a very exposed site. The fruit trees were rescued from parts of the Findhorn Foundation garden which was being shaded out by Sitka spruce and Scots pine. Also planted were birch, wild cherry, hawthorn, hazel with the idea of a mixed woodland deciduous garden, all the while growing more veggies, and berries for my growing family. At the time it was called a wild edible bush garden to demonstrate a different approach to the classic herbaceous borders of the Findhorn gardens.

At the same time, Craig started adding extensions to the Barrel, all built out of recycled materials. It grew from 25 sq metres to 180 sqm over the years, the garden kept expanding as well until one day some friends (Jane Hera and Andy Langford) asked if they could use it as a demonstration garden in the permaculture design course they were running. Having agreed to that, as long as he could participate in the course and hear about this permaculture thing. Having been born and brought up on an isolated farm in Australia, I had just built, gardened, and lived as we used to, and not bothered with which paradigm or technique I was using. 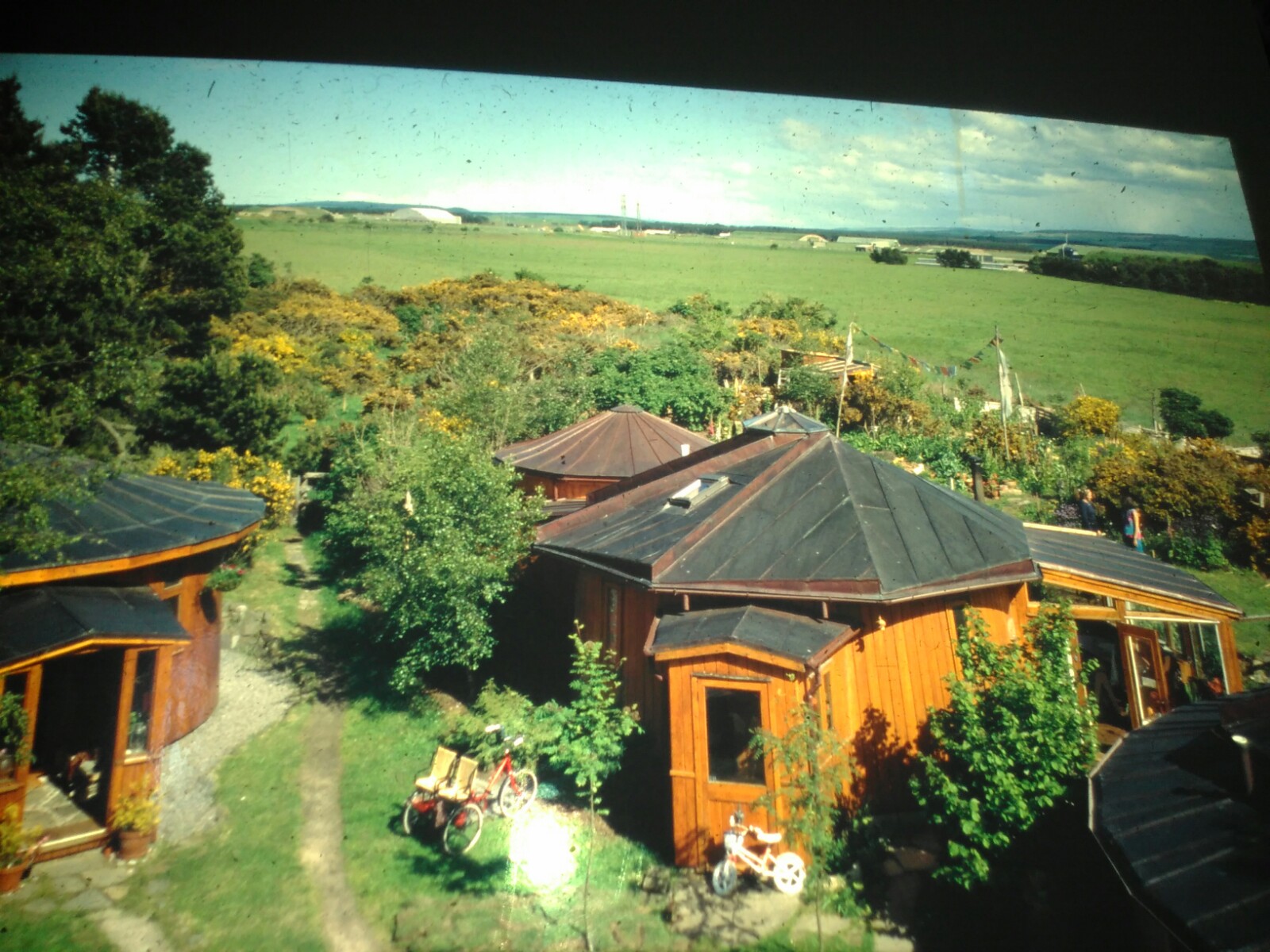 It took a bit of adapting to all the lingo which actually was just common sense from my point of view but it easily fitted into my sense of co-creation with nature which was one of the founding ethics of Findhorn. We do the people care thing quite well as well as fairshare, even stretching it to include the nature kingdoms. And of course then earth care was manifest everywhere from compost heaps, windmills, solar aquatic sewage treatment and ecological passive solar building.

So with all this more conscious design process information Craig kept expanding the garden with all the guests who visit the community, putting up a greenhouse, a polytunnel, digging a pond and redirecting rainfall to fill it, installing a fresh water tank to supply kitchen, and wood stove with heat exchanger burning  wood from a nearby plantation managed by our wood co-operative. From Zone 00 to 5, it was easy to demonstrate a permaculture lifestyle. 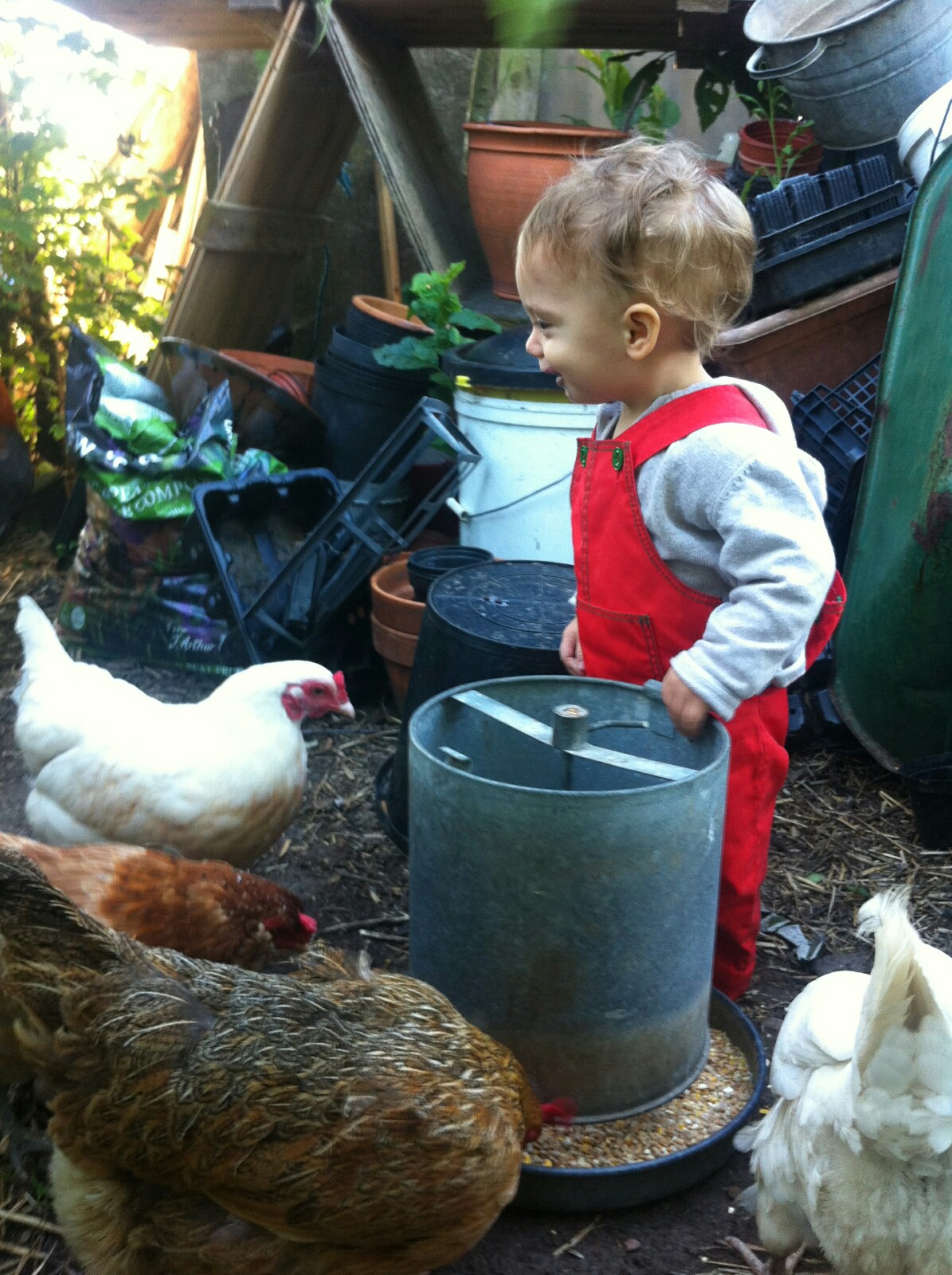 Maria has been renting a room at Barrel House Permaculture since late 2016, and has become firmly based in the Findhorn community. Since living there she has been busy revisiting the entire household using her own permaculture design process, inspired and intrigued by what Craig was doing, what he wasn’t doing and why.

"With its rich history, evolution and creative response to many changes, we like to see it more as a living learning centre both in the sense that people live and learn in it, but also that it has a life of its own that cannot necessarily be predicted in or governed by a linear framework. As such, there is no one goal articulation or design that is applicable to its entirety. We often find ourselves surveying, designing, and tweaking simultaneously on multiple levels, as we become living parts of the system through everyday interaction with it and community life, with all its associated fluctuating opportunities and constraints. The design is a land-based one as well as a social one, and the two are inseparably intertwined." 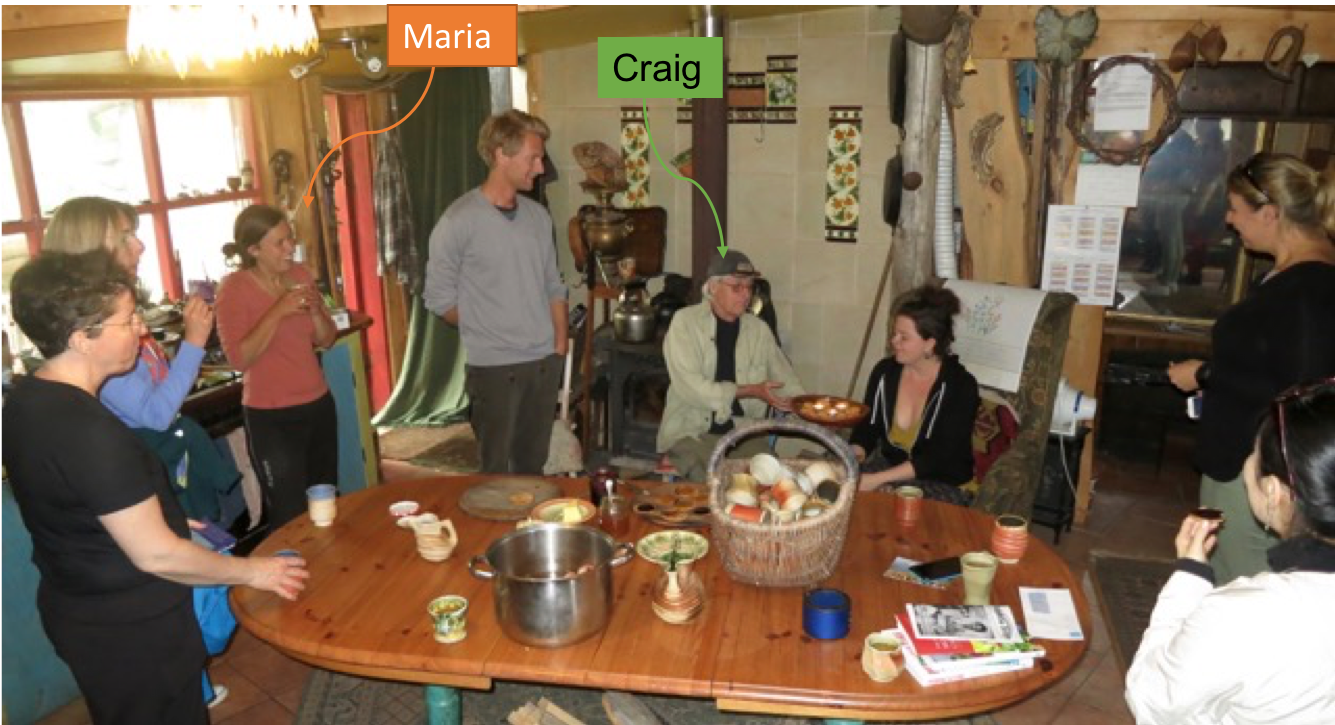 On joining the ScotLAND Project, Maria also commented: “Joining ScotLAND has been both a joyful and thought-provoking journey. The ScotLAND team have been brilliant in answering any questions we might have and supporting us along the way, and it was just so lovely to host a tutor for a visit and form that connection and exchange tips and ideas. The process also provided good motivation to make sure we have our paperwork in order, and have written up our everyday life in a design framework, which we otherwise have a tendency to put off doing. It raised some good and interesting questions about how we communicate and demonstrate permaculture, and we feel our project has gained a deeper dimension and clearer intention for it.”

And lastly, an invitation to co-create with the inhabitants of this thought-provoking home: "This blog is an attempt to communicate this project in written form, but really, you should come and experience it in person to understand it completely - we have two spare bedrooms and several creative mattress locations, or a hutch it you prefer!"