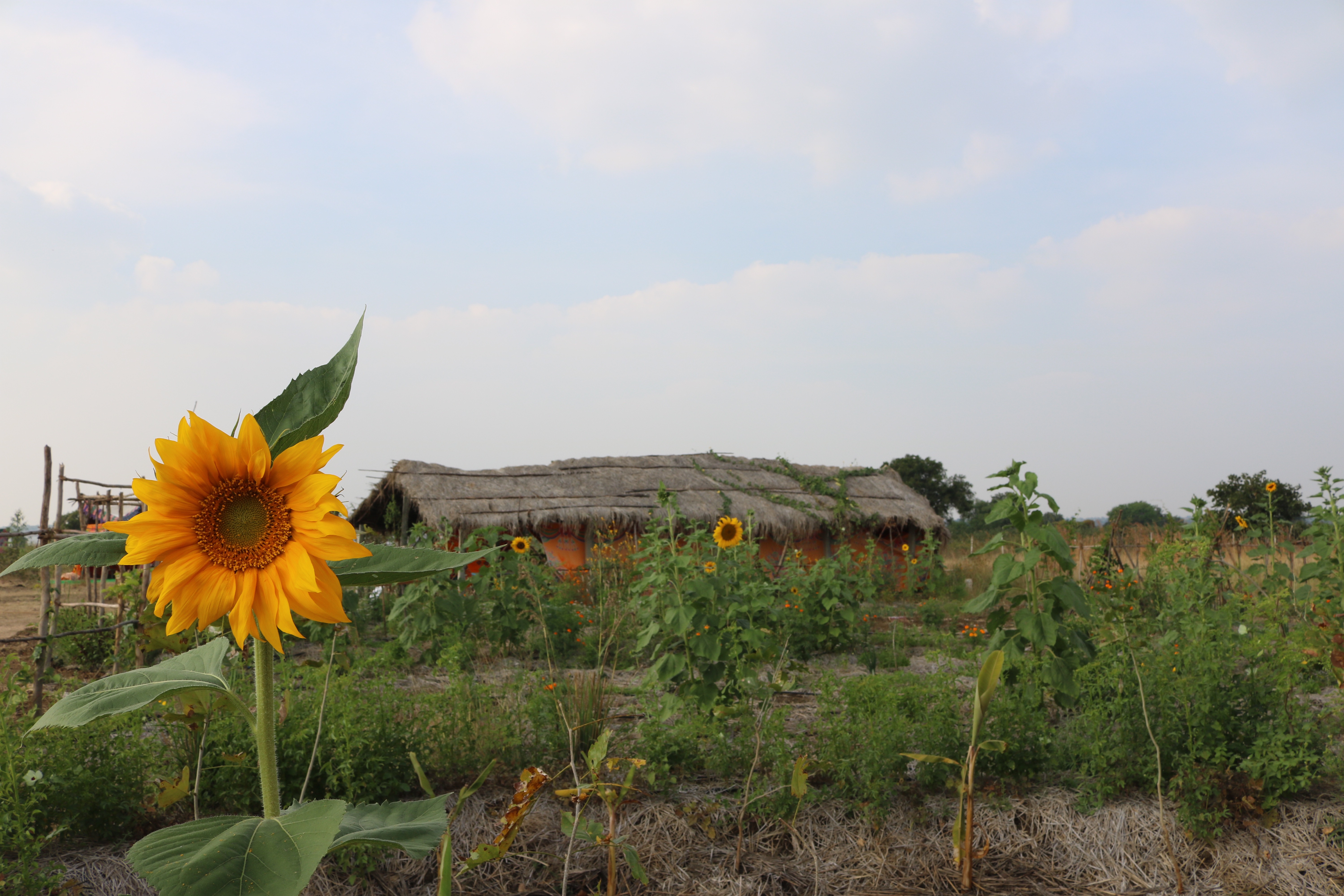 The university campus is by far the largest I have been on. Like a town in itself, in a sprawling city of over 10 million people.

Gathering together on Friday, countless happy reunions took place amongst the feverish final preparations. From the convergence main hall, we all made our way via rented local buses (suspension, what suspension?!) to our various dormitories. Excitement was building!

After Saturday breakfast, we were greeted by a lovely and moving opening with traditional music welcoming everyone into the main hall, followed by a ceremony bringing in local seeds that were added to a stunning seed mandala in the centre of the entrance hall.

Following the welcome, where a panel of Indian and international permaculture and natural farming luminaries graced the stage, we were treated to presentations by two pioneers and leaders in Vandana Shiva and Robyn Francis. Then we had a feast of presentations to choose from, in four different rooms.

Personally I went to great talks about permaculture in clay and sandy locations in the caribbean; providing hope and opportunity for vulnerable youth in Melbourne Australia; permaculture pioneers working with refugees and war torn communities in Afghanistan, Lebanon and Kazakhstan; a journey through living soil with one of India’s leading agriculture lecturers; the Aranya Farm and their amazing journey and much more.

Andy Goldring also presented at the Conference about CoLab and sociocracy. An enthusiastic audience heard about the reasons and history that has led to CoLab’s existence, and why we urgently need to scale-up our work in response to multiple global crises and an epidemic of idiocracy. Andy went into how the CoLab is proposed to work, using sociocracy as its governance tool. Many CoLab postcards were handed out to interested people afterwards.

We were also treated to some fantastic cultural performances - activist story telling and singing, traditional dance, traditional martial arts and music. All in all, the conference was a special treat!

We all came together early Monday to catch buses out to the convergence farm site, approximately 3 hours from Hyderabad. Understandably this took some time! As we got closer the roads became smaller, dustier and bumpier, and the lack of bus suspension even more noticeable.

We arrived on mass to the farm, set against a large lake with cotton crops surrounding the other three sides.The farm itself is only a few years into implementation of its permaculture design and was very impressive, especially regarding their water catchment and management strategies. Even more impressive was the convergence set up and the sheer size of it - everything had to be constructed for the convergence, from the food and dining area, the presentation tents, compost toilets and washrooms, information areas, traditional skills space, hangout zones, and more.

A slow procession through registration was followed by setting up our accommodation and orienting ourselves. We then filtered through to lunch, knowing that whatever else may happen, at least we would have fabulously delicious traditional Indian food, with much of it grown organically onsite.

Unfortunately the process of packing, moving, and settling took longer than anticipated, with the result of it being a very late start for the initial afternoon sessions. The first CoLab session was due to start late afternoon, but would have been competing with many other presentations, and with people (participants and ourselves) very tired from a long day already. We therefore decided to cancel the first (shorter) session and put all our energy into the other three longer sessions. In hindsight it was definitely the right decision.

Final preparation and planning meetings, which started at the conference, continued at the convergence until we were settled and happy with our plan.

The first session attracted a much larger audience than we’d anticipated, a great beginning.

Starting with a role play, we gave a visual and spoken word retelling of the story leading to CoLab’s formation, using mycelium as a powerful analogy for the growth and methodology of how permaculture spreads and grows.

Robin then lead a “where we are in the world” group activity where everyone got up and stood in their country, which eventually naturally created a world map. Apart from getting people active and seeing how broadly representative the convergence actually was, it also gave people a chance to meet with new people from their countries and regions. Robin then posed questions for people to discuss in their groups:  ‘What would be of most benefit to them from CoLab?’ and ‘What skills and knowledge could they offer to CoLab?’ This really helped to get everyone brewing ideas and hatching plans!

Then for the nuts and bolts so to speak. Andy took on the less exciting but fundamentally necessary task of explaining CoLab:

To finish, lead by Jennifer, we reinforced the main points of CoLab, especially its simplicity, its participant/project driven style and fulfilling the function of taking all the immense energy and explosion of ideas that occurs at IPCs and national/regional permaculture convergences and allowing them to continue and grow via the online platforms.

The session seemed to go well, and the feedback we received was very positive.

An interactive process to get people involved and focused got the session rolling, with another large and enthusiastic gathering, especially encouraging considering it was late afternoon on a hot day!

After the ‘warm up’ Jennifer lead the grouping process, which involved participants creating different groups they would like to see happen, then the rest of the participants joining with the groups that resonated most for them.

These were the groups that were active:

The top four groups have actually carried on from IPC 12 London Next Big Step process. We hope that all of these new groups can follow similar paths from germination to grow into active global working groups as part of the CoLab development.

Each group responded to these questions:

All of the groups were very active and enthusiastic. I was involved, as I have been for the past two years, with IPEN, so I didn’t get to see much of the other groups in action, however the report backs at the end of the session were very detailed and full of great ideas. Everyone was very aware of where their groups are at, the array of skills and knowledge to utilise and the challenges they face. Impressively, all the groups were very clear about their vision of what is needed to succeed and to rapidly scale-up in these times of great crisis and opportunity.

In the third CoLab session, we saw another great turnout, many people from the first two sessions but encouragingly we also had more new faces - people who couldn’t make the first two or who had heard about what we were doing.

After an introduction and group activity we jumped straight back into the groups, this time with a focus on what groups would need from CoLab, what they could offer and what are the steps forward from here.

Again, the groups enthusiastically discussed and brain stormed their way to detailed outcomes. Many even allocated individual tasks to for group members to go on with!

There is a real sense that these groups will turn into action beyond the IPC, more so than in London, because CoLab and the concepts and structures of how these groups can work is more tangible to the participants. This isn’t a criticism of past efforts, but acknowledging the progress that has been made to build on those initial efforts.

Now our task is to take all the immense energy and explosion of ideas that occurred at the IPC in India and provide the opportunities for them to continue and grow via the online platforms. 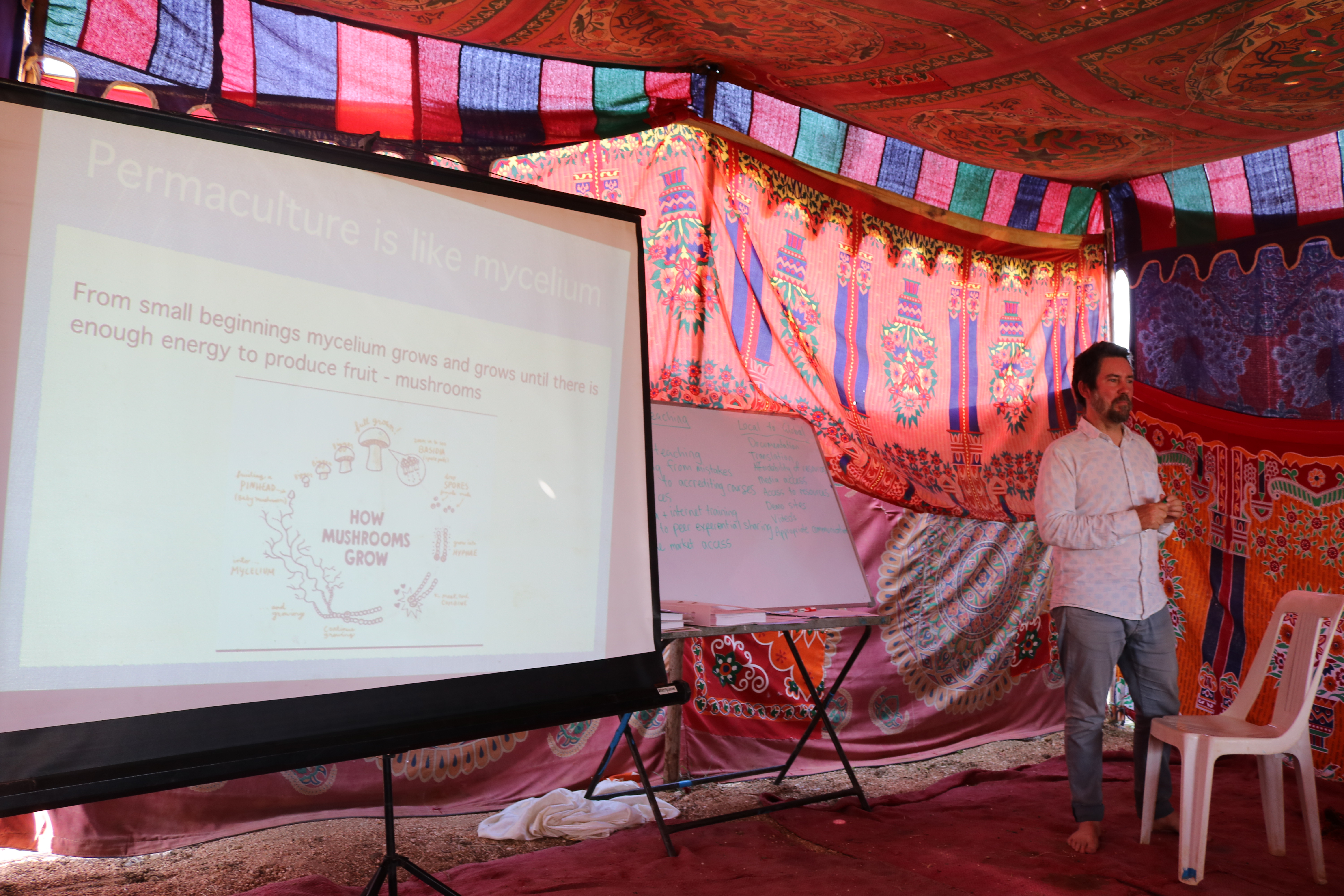 The IPEN session was separate to the CoLab sessions but a good opportunity to show what a group that will be part of CoLab activities is doing. It was a ideal to be able to explain about IPEN in more depth and to share the results of the survey that we had conducted during 2017. We also hoped to gather more information about what people would like from IPEN and to add more people to the list of potential project participants.

We had what is sometimes referred to as the ‘graveyard slot’ - after lunch, and it was a particularly hot day as well. To add to the mix, it was a late lunch after the morning sessions had gone overtime.

Even so, we still had good turnout and a very interactive crowd. Due to the late start and people filtering in over about 20 minutes, we held an informal initial discussion about what people are doing and how IPEN could help them to be more effective and expansive.

The presentation that followed was well received with people particularly interested in the survey outcomes and enjoying the mycelium metaphor that sums up IPEN, CoLab and permaculture so well.

We also conducted further group discussions about education priorities and have documented those results. From both the CoLab group sessions and the IPEN session we collected the responses from participants before going in-depth about IPEN’s activities or discussing the survey results. This was done deliberately to reduce bias and collect a broader range of information. Interestingly, the data collected from the IPC truly reflected the survey results to further clarify IPEN’s priorities and projects for 2018 and beyond.

After the sessions, we now have another 25 people keen to be part of IPEN projects and work. We are very happy with that result, as well as being able to share the continued progress of IPEN and IPEN’s part in CoLab.

At the IPC there were quite a few comments of genuine appreciation, both to the whole group in the sessions and individually, that the CoLab exists. This also occurred in the International Permaculture Education Network (IPEN) session. People were very thankful for all the hard work and dedication (often volunteer as well) involved to create CoLab to the point where it has got to now.

Both from a CoLab and IPEN perspective it was a great success and extremely beneficial to have the time and space to run the sessions. A huge thanks to the entire Aranya organising team for giving us the opportunities to continue this important work.

As with all permaculture gatherings, so much of the discussions and progress that took place occurred not during the sessions but outside of them - at mealtimes and informally during breaks - and I know I wasn’t the only one engaged in many a fruitful conversation!

The CoLab sessions themselves didn’t run as smoothly as we would have liked, and in many ways they could have been better. Hindsight always delivers these results though. Under the circumstances and with the energy available and obstacles faced, we feel that everyone put in a huge effort and we achieved a great deal. An honest review of the sessions gathered important lessons for next time as well.

Regarding the entire IPC - what a fantastic event! A great representation from India and over 60 countries, so much shared and learned, and another important building block for permaculture globally! And then there was the food!!!

Yes there were glitches and hassles from time to time. However if they could be fixed, they were and quickly. And some things, like the lack of wifi, on one hand was a slight hassle but on the other hand was a blessing to (mostly) remove people from their phones and laptops! Overall, to put on something of that scale with the small budget was an amazing effort. All of the organisers and volunteers were super friendly and worked so hard to make it run as smoothly as possible.

On a practical finishing note - all that good permie-manure collected in the compost toilets during the convergence will grow some amazing fruit trees. It's also a great metaphor for the IPC itself. I’m sure they’ll grow fantastically well and hope to harvest many fruits in the future!